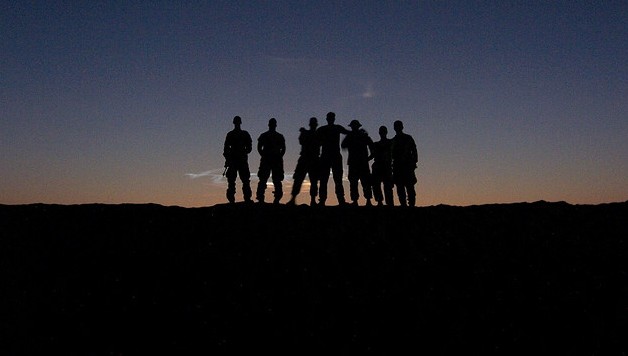 One weekend while I was in Afghanistan (during my second straight year of combat deployment in 2003) my wife and children attended an event put on by the Utah National Guard for soldier’s families. The Utah Guard tries hard to support families and mitigate as best they can the negative effects of their husband’s/family member’s absence in service.

While there my wife was approached by a reporter from a local news organization. The reporter, a woman, told my wife she was grateful for my service and wanted to get the message out about what a soldier’s family goes through during a deployment. A human interest piece.

My wife agreed and they set a time to meet at my home and record an interview.

During the interview the reporter asked a lot of questions and the film crew recorded the entire thing. They were very ‘feely’ questions and my wife cried a couple of times. She was going through a lot that year. As you can guess, a soldier’s deployment is not easy on the family at home. She was frankly grateful that the reporter wanted to tell her story.

Problem was the reporter DIDN’T actually want to tell my wife’s story. She had her own story to tell.

When the piece aired my wife was shocked and horrified. The reporter had brutally cut and edited her tearful answers to innocuous questions so that they looked like answers to completely different questions. Then they’d play some footage of a soldier madly firing a machine gun and screaming. They deliberately made my wife look as though she was afraid I was going to come home and murder the children and maybe the neighbors.

And that was the story they told. It wasn’t a human interest piece. It was a story on how soldiers in the Global War on Terror were going to come home ticking time bombs and murder someone.

Which is why this story cuts so deep. That dishonest and sensational narrative gets endless play in the News Media and it’s a lie.

My wife’s story goes further. Having calmed down about the dishonest and disrespectful way she had been treated by that reporter she made a phone call. She called the reporter and told her how much she had liked the story. She gushed about it. Then she asked the reporter if she could pretty please have a copy of the full original interview footage for our family archives.

The reporter told her she’d need a subpoena to get that footage and hung up on her. The reporter knew exactly what she had done and had clearly done it on purpose, with malice aforethought.

You can see why I am refraining from naming the reporter or the news organization. A woman and an organization that cynical would have no qualms about breaking my little family in half for speaking the truth about them on this subject. I realize that it’s unlikely they’d care enough to target us but I remain cautious.

So, go out and hug a veteran today, or something. They won’t bite. Probably. 😉