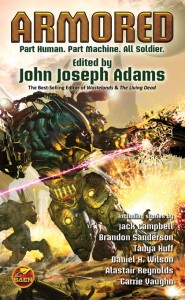 The last month has been pretty crazy for me. I spent most of it in Korea doing various mentally and physically strenuous things. Separate post for all of that.

While I was gone the anthology I’m in with Brandon Sanderson hit store shelves. I missed going to a bookstore to see it on opening day, being in the far east, but I was pretty excited nonetheless, showing tweets announcing the event to the guys in the barracks and threatening them with dire bodily harm if they didn’t evince a little more excitement for me. “Yay!”

And, of course, returning home is often not as relaxing and stress free as one imagines it will be, so the first opportunity I had to actually go see ARMORED in the wild was Saturday April 8th. It coincided with a signing Larry Correia and Mike Kupari were doing for there new book DEAD SIX. 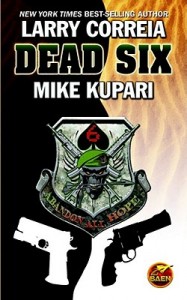 Mike just returned from Afghanistan where he worked as an EOD tech for the Air Force. Welcome home Mike and congratulations on the book!

I stopped to say hi to Mike and Larry and to grab a copy of Dead Six before I hit the shelves to gaze in wonder at my name in print in an actual store. As always Larry was the epitome of benevolence and courtesy. He asked me to grab a copy of Armored for him too so I could sign it for him. My head almost exploded.

The computers said the store had three copies but the very helpful sales associate was only able to locate one at first.  I gave that one to Larry, (Baen sent me two contributor copies earlier) and signed it for him.

While I was scribbling at their table one of Larry’s fans perked up and said, “Hey! I just bought a copy of that book.” Which explained where the second of the three copies the computers thought the store had had gone. I signed that one too.  Missed an opportunity though. I wish I’d had a picture taken with me Brian and Larry, showing off my two very first actual signed-with-a-pen books. Definitely going to remember to do that with my first actual novel.

At about that time the sales associate returned with the third and final copy of Armored, which I bought. Which means that B&N in Sugarhouse is bone dry now. I hope they reorder. 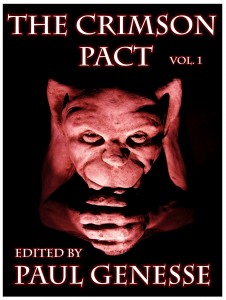 I also met Paul Genesse the very cool and friendly author of the Iron Dragon series, which I have not yet read but which my sons absolutely love. Paul is notably making an increasingly successful go of the e-book/POD (print on demand) business model with a series of anthologies called THE CRIMSON PACT. I think I may submit to that…

All in all a great first week back. Now to get back in the groove on the novel Brandon and I are doing.

1 thought on ““Armored” on the Shelves”