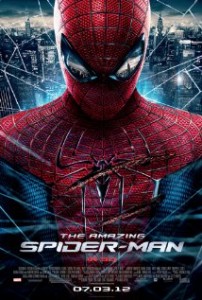 I was not looking forward to this film when its marketing push first started. We already had one of these didn’t we? Good ones even.

And the actor playing Spider-Man looked like a goof. Especially his neck. I didn’t like the look of his neck. It was way too long.

Then as we got closer to the release of the movie and more story details crept out my ears perked up and it started sounding more interesting. As Lou Anders pointed out in a tweet there were details about this one that were ineffably right. Peter stayed in High School and had to deal with bullies and being a bully. He lived at home. He had a New York accent. His girlfriend was a blonde Gwen Stacy. He made his own web shooters. The list goes on. The film looked like it was staying far more true to the source material than others had.

Staying true to the source material is, of course, not a recipe for automatic success in a movie. It’s usually a recipe for disaster, books and comic books being so very different from film. But this one worked.

It worked well. I loved this movie. I will own it.

Which makes me think about originality. How original can such a film be? Nothing about it was original. Not the story nor the characters nor the concept itself. It was a complete retread.

Yet I loved it. And I did not feel like I was watching something I had seen before.

It’s certainly possible to be unoriginal with something like this. It’s been done. Yet this one worked.

I think I’m starting to understand what Brandon Sanderson means when he says that originality for originality’s sake is vastly overrated.

Whatever you’re doing, do it well, and you’ll be fine.